Colour Haze - To the Highest Gods We Know 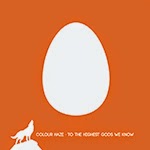 Colour Haze from München, Germany, has been one of the leading bands in the stoner/hard rock scene for a long time now. They seem like a band that can do what ever they want and how they want and always succeed in the end. You can hear the influence of the classic 60s/70s rock acts like Jimi Hendrix, Led Zeppelin, Black Sabbath and Cream to name a few, as well as the 90s desert/stoner rock boom (Kyuss etc.) as well as more psychedelic and progressive elements, but Colour Haze always still sounds mostly like Colour Haze. One of the main factors in this band is the often very fuzzy, warm and full sounding guitar of the singer/guitarist/band leader/label boss Stefan Koglek, but he sure has a talented, tight and soulful rhythm section in Manfred Merwald and Philipp Rasthover.

As always, To the Highest Gods We Know was recorded and mixed totally analogue with vintage equipment and you can hear that in the sound. Bass player Rasthofer also plays Hammond M3 on one track, which is great. This time the band also has a Modern String Quartet questing as well as flute and horn players! I told you they can do anything... The album begins with "Circles" that is a cool, heavy and meditative tune that starts off slowly and with emotion and really gets heavy half way at around the four-minute marker. Excellent, classic Colour Haze stuff! "Paradise" is a groovier and shorter piece bringing to mind Hendrix, although Stefan's playing style and sound is rather different, and the great vocals are closer to Cream. A great, honest and simple rock song. The instrumental "Überall" is the second over eight-minute track and begins in a tranquil, relaxed mood. The faster rocking begins after two minutes, and I'm reminded of Motorpsycho. Some great guitar playing on this one! Also "Call" lasts for over eight minutes and this is the song that also has organ on it. The drums only join the game for the last two minutes, so you have some time to relax and take a deep breath. On the long, instrumental title track the band has a brand new approach... The main instrument for most of the track is acoustic guitar. The beginning is very minimal, but the track starts to grow gradually, and more instrumentation is added. This doesn't exactly sound like anything I've heard before, sort of like modern classic music mixed into the good old folk/blues music. There are also some Oriental vibes, and some parts remind me of Led Zeppelin in their acoustic/orchestrated mode. You might need to listen to this a few times before you get it since this is not easy listening stuff, but I find this track rather interesting. The short and calming "The Last Call" outro finishes off the album with just some organ drone and beautiful vocals with a message. Very nice! I'm sure the fans will love this adventurous new album.