nick nicely: Space of a Second 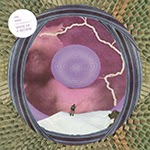 nick nicely (yes, written like that without the caps...) is a cult psych rock/synth pop/shoegaze/electro artist from London who first released a couple of magical, ethereal 7" singles in the 80s before disappearing for decades. In 2003 he made a small comeback when an excellent compilation album called Psychotropia was released. That's when I found the guy and fell in love with his music. It still took years before any new music was released, but in 2011 an album called Lysergia finally saw the light of day as a highly limited cassette release, and another compilation Elegant Daze: 1979-1986 was also released, both in the US.  In 2012 nick also did a remake of his haunting "Hilly Fields" single (originally from 1982) for Fruits de Mer Records and his track "Rosemary's Eyes" was included on their A League of Psychedelic Gentlemen EP. The following year, a track "Wrottersley Road" from Lysergia was put out on a 12" on Emotional Response / All Time Low also including three remixes. Space of a Second released late last year is in effect pretty much the same as Lysergia, since both albums include about 90% same songs, although in different order, and there are some changes made in the songs as well, so even if you were lucky enough to get one of the 300 tapes, this very cool vinyl release is a must of you like nick's music.

Since I have already reviewed Lysergia, I won't go through all the songs here. Let's just say that nick has the ability to write dreamy, beautiful, emotional and fragile songs that also have the experimental, mind-altering and plain weird elements that make music interesting for me. You can easily spend a lazy afternoon in a pleasant, psychedelic haze listening to this album. Some of the tracks are more droney, ambient and atmospheric using lots of sound effects, studio manipulation and even field-recordings, but there is also a lot of melody and "normal" songs structures on the album and nick's soft, dreamy vocals are spot on. A melancholic, beautiful song called "Rrainbow" is a new addition, and I love it. An acoustic version of "Hilly Fields" is also added; I think this is pretty much the same version that was already used on the B side of FdM Hilly Fields single. Wonderful. My favourites possibly still are the 80s New Wave / Synth Pop styled "Headwindaheadwind" and "Rosemary's Eyes". I really hope the nick will keep on recording and releasing new stuff since he has a style and musical universe of his own.