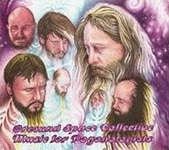 This Danish/Swedish improvisational psych/space collective keeps on releasing a steady flow of high-class jam albums and why not. Music for Pogonologists is the band's 15th studio album and was recorded already in 2012. The line-up also features an American guitarist Daniel Lars as well as members of Danish band Paper. This time the album (sort of) has a theme: a pogonologist is a persom who studies beards! The track titles, amazing cover art and a spoken word intro to "Beardlandia" were all inspired by writings of Upton Uxbridge Underwood (1881-1937), who was the world's most renown Pogonologist. Believe or not... A cool idea for a band with a lot of beard, anyway! The 2CD and 2LP versions of the album differ quite a lot having some totally different tracks, different edits and so on. So if you want to have all the music you have to buy them both which I warmly recommend! An the monet I don't have the brand-new vinyl version yet, so my review is based on the double CD that was put out late last year.

"Beardlandia"starts off the album with some ambient space sounds and a narration about Mr. Underwood's weird theories about beards. Cool! After two minutes the jam begins in a rather heavy and groovy, progressive way. Great! Things get spacier along the way. CD-only track "Ziggurat of the Beards" is a bit more experimental piece, and sort of doesn't really go anywhere, but it also has some great guitar and synth stuff. "The Trichophantic Spire" is another CD-only piece and a bit shorter at 6:10 (all the other tracks are in the range of 11:28 and 33:26...). This is a easier, softer stuff and Mogen's synth work is more important here than the guitars. "Bearded Brothers" (also only on CD) has a nice, airy flow and groove like a lot of the Paper tracks and I like it a lot. The first CD finishes with the 26-minute "Remnants of the Barbonaeum" that begins in a very minimal, spacey manner, and stays rather peaceful and floating. A great, uplifting jam to get spaced out with!

The second CD starts off with the full version (33:26) of the title track "Music for Pogonologists". The vinyl version has a nine minutes shorter edit. It starts out slowly, but then we get some great early 70s styled hard/prog rock guitars and a nice groove. There is a nice, more relaxed blues vibe in the middle, and in the end the track gets more intense and psyched-up. Very nice! "Barboconsciousness" is another long improvisation, but this one has a cool, mystical and mysterious vibe. There must be some magic in the beards! "Portal of Pogonic Progress" (CD-only) ends the album in a easy, tranquil mood although the very end gets a bit more intense. Another great album by OSC, can't wait to hear the vinyl-only tracks as well! The CD is limited to 500 copies like the vinyl, but there are three differently coloured vinyl editions.