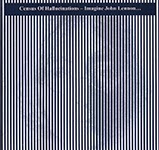 This is a new 30-minute EP by UK based psych/prog/space/ambient act Census of Hallucinations. This is a rather exceptional release even for this band led by guitarist/singer/songwriter Tim Jones with his partner Terri~B. You can take this as a one long song divided into four parts ("Part 1: In Ruins", "Part 2: Conspiracy of Silence", "Part 3: Faculty of Mirrors and "Part 4: He Who Can Manage Camels"). On this release Tim doesn't even play anything, just does the often very narrative vocals. Terri~B does the wonderful female backing vocals with Maxine Marten.  Kevin Hodge plays a lot of acoustic guitar. The highly talented John Simms (Clear Blue Sky) plays electric guitar, guitar synth, keyboards and also sings backing vocals. Mark Dunn plays bass & cello, Paddi drums & percussion, Barry Lamp sax, synth & Mellotron on the first part. In addition, James Jones narrates his poem "Lost in the Lakes". The music is very tranquil, floating, spacey, dreamy, emotional and ambient with a nice, soft psychedelic vibe. I guess Pink Floyd fans will love this. The thoughtful, even philosophical lyrics and the whole concept seems to be very important on this CD-R. The press releases tells us that these four parts are "an exploration into the self; a hard look at how or why we fit into this current expression of humanity. It explores subjects such as old age, holidays, the breaking of hearts, the absence of light, the lack of love, the realization of what love is and what infatuation is." Imagine John Lennon is Part 1 of a planned two-part CD, so we can except some more of this later in 2015. Great!