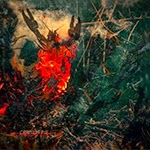 Cranium Pie is one of the most important band's that I've discovered through Fruits de Mer / Regal Crabomophone. Their first full length LP Mechanisms Part 1 was released in 2011 and I have loved it ever since. The same goes for their second album The Geometry of Thistles released in 2012 but actually including material recorded before the Mechanics Part 1 sessions. A perfect companion to a mushroom trip? All the singles and compilation tracks are excellent too... It's no wonder they have been featured on two A Monstrous Psychedelic Bubble compilations as well. Their sound is a perfect update on the classic early 70s prog/psych/Canterbury scene vibe and they also have a wicked sense of humor. "Bonkers prog rock" is a a rather suitable description... ´They have been compared to old bands like Soft Machine, Van der Graaf Generator, Nektar, The Nice and Caravan, and personally I can also hear a lot of Pink Floyd in their music, but they have still upgraded that old school sound to modern times a bit which is great.

The new album will be released on double album in March. Each four sides will have around 19 minutes of music. On the promo CD-R I had there are no song titles, and the whole album is divided just into those four sides, although there are obviously different sections on all sides. The album starts off in a mellow, slow and Pink Floydish mood, with a steady rhythm section, very nice organ work and some weird, psychy sound effects. Soon some spoken word is added to a great effect, and the music starts to grow. Then there's a bit groovier, more melodic section with vocals, and then we get some more orchestration, with Mellotron I bet, and more progressive parts and hypnotic jams, and some, bluesy, early Colosseum vibes next. I love it already and we're still on side one!

Side two begins in a soulful mode including some trippy flute and Brainticket sounds. At around the three-minute-marker there is a beautiful, short vocal section, before all the weirdness steps back in. Then there's some groovy, Can-like jamming, and strange guitar and organ solos, then they jump straight into a Jimmy Hendrix trip for a short while, and then there's a really odd, VdGG styled, progressive section that's pretty hard to explain... Phew! The rest of side two is more laid-back, organ-driven and moody again.

Side three kicks off in a totally bonkers way including some of the most far-out vocal effects I've ever heard. Then there's a really cool guitar solo section, and the weirdness continues, before things cool down towards the end of the side. The vocals at the end remind me of early 70s Genesis, and there is also some pretty acoustic guitar in there.

The last part begins with a Soft Machine styled, jazzy and soulful jamming, and then we get some peaceful vocals. Then it's time to freak out some more, I think I'm loosing my mind... I love the spoken word part in here. The ending is a great, pompous finale for this insane sci-fi crab opera... Get this superb album and be amazed!