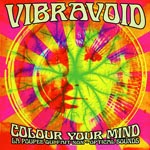 This is the third 7” release on Fruits de Mer by Düsseldorf’s own psychedelic acid heads Vibravoid. Kaut Rock Sensation and What Coulour Is Pink? were both very mind-blowing and successful and sold-out in a nanosecond, so no wonder the relationship continues… This time the band has chosen three great cover versions by three different psych rock bands. If you have the band’s latest studio album Delirio Dei Sensi on CD, you have already heard all these amazing songs played by Vibravoid, but these versions are at least remastered and the vinyl album only featured the first track. “Colour Your Mind” was written by Australian band Tyrnaround who were formed in 1985. Their music was a wonderful mix of late sixties psychedelia and garage rock (Pink Floyd, The Seeds, The Beatles etc.) and this song definitely was one of the best. Vibravoid does an absolutely brilliant version with great harmony vocals, fuzz guitars, groovy beat and marvelous organ work. What a brilliant way to spend 6 minutes and 11 seconds! Oh yes, there is an extended psych out ending added… Then we get some French stuff: “La Poupee Qui Fait Non” originally released by Michael Polnareff in 1966. Nice, melodic song with lots of pop sensibility and added psychedelia. Then it’s time to cover some obscure US psych and Human Expression’s “Optical Sound” sounds just like a lost Vibravoid song. The lyrics are about a bad LSD trip, so it makes some sense I guess… Very good stuff! The colour vinyl comes in a trippy opne gatefold cover designed by Vibravoid’s head freak Christian Koch so you know you will get the full experience with this one. Get it while you can!