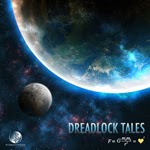 Dreadlock Tales is an electronic, down-tempo, psychedelic, ambient, spacey and Hinduism-inspired dub project by Kimmo Tyni who also plays guitar and sings in a Finnish stoner doom band Albinö Rhino. This album (the first one I have heard) also includes guest musicians and samples. The CD includes six long tracks in 50 minutes.
The album starts off with the simple, hypnotic and soothing “Shiva Shambho Dub” that would be the perfect soundtrack to initiation into some strange, Eastern-tingled cult. Things get more electronic in “Gravity Equals Love” (feat. Mikael Ukura & Meir Ron) that has some nice, cosmic male spoken word on it. Groovy, atmospheric and deep stuff. The instrumental “Saraswati” features Dj Chandrananda, and could almost be 90’s Astralasia (very cool, spacey ambient, by the way!). The ultra-hypnotic, trancey “Nataraja” has a faster beat and also rhythmic delay guitar work which possibly makes this the album’s highlight for me. “Maiden of Death” has a rather different vibe since it has two female singers (Kardemimmit) singing in traditional Carelian/Finnish style. The very Indian sounding, wonderful “Hari ॐ” has a more acoustic feel, but the programmed drums, synthesizers and bass are still there. The track also features Surya Devi and Tree of Dub. I like the female chanting and the general laid-back vibe of this piece. Gravity Equals Love makes a very enjoyable listen if you want to leave the material world behind for a while and just relax in the spiritual reality. Suitable for not-quite straight edge Hare Krishnas and other cosmic travelers.
www.facebook.com/dreadlocktales
Lähettänyt Unknown klo 16.25