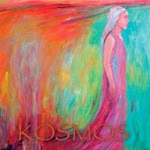 Kosmos is a psychedelic folk/prog band from Turku, Finland, and this is their fourth album. I’ve really enjoyed all their previous efforts, and this one is really great as well. On their previous album Vieraan taivaan alla (2009) the band also went into more electric, almost space rocking direction, but here they are back to their folk roots but with some symphonic prog elements. The acoustic guitars, Mellotrons, organ, female vocals, flutes, bass, drums etc. are all still there. They draw their influences mostly from the psychedelic and progressive folk and rock of the early 70s and that’s easily detected in their sound and vibe.

The 38-minute album has seven tracks. The opener is the beautiful and melancholic title track “Salattu maailma” that has pretty acoustic guitar and Mellotron and wonderful, magical melodies and mysterious vocals (all in Finnish, but translation in English is also given). This reminds me a bit of Renaissance. Excellent! “Simpukka” starts off with some sounds of the waves and seagulls plus lovely acoustic guitar and then the lovely, clear female vocals of Päivi Kylmänen join in. This is a more folky affair. “Loitsu” rocks a little more and has a positive, sunny vibe with some guesting violin player as well. “Peili” sees the band return to their usual, more melancholic and peaceful folk mode. On side two, the seven-minute “Tuuli” starts off in a very gentle but psychedelic way. It starts to move with a mid-tempo beat sometime after the two-minute-marker, and we get a nice violin solo among other things. The most psychedelic track of the album is the longest song “Uni” that is very deep, mysterious stuff with male narration and weird sound effects. This one has a rather dark atmosphere and I like it a lot. The album is finished with a quite Indian sounding cover version of the excellent Pekka Streng classic “Takaisin virtaan” that works really well. Streng must have been one of the band’s biggest influences since the beginning and this is a worthy tribute to their long-dead but never forgotten prophet. The vinyl version comes in an amazing open gatefold cover and is limited to 500 copies. The album is also available as a factory-made CD-R with proper cover art. One of the best bands in Finland right now I think!