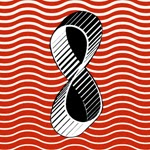 Piotr Kurek is a Polish composer and multi-instrumentalist living in Warsaw who has done various collaborations and released stuff on compilations since 2006. Edena is his third album after Heat released in 2011 and Lectures (2009). Edena first saw the day of light in 2012 as a limited tape release, but has now been released on very limited (150 copies) vinyl as well. Kurek uses electronics, synths and organs as well as sampled and looped sounds to create very hypnotic, weird and pulsating sonic worlds. There are enough melodies to keep things interesting. Some of the tracks bring to mind the old synthesizer gurus like Tangerine Dream (that’s the stuff I like the most) while some are more experimental and maybe modern as well. There are only six compositions on this release making it last just about 30 minutes, but those minutes are used well. I do enjoy this album and can recommend it to those who like experimental synthetized music. You can also buy the album in digital form from Kurek’s Bandcamp site.