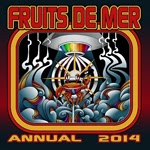 Phew… Although Fruits de Mer have released some strange and unpredictable EP’s this must be one of the weirdest… The story begins with an unreleased, weird 1964 instrumental surf track “I Remember” by a band called The Raiders featuring Trevor “Beau” Midgley & Robic White. The EP also includes a psyched-out surf band The Blue Giant Zeta Puppies playing their versions of Barry Gray’s “The Joe 90 Theme” and “Lost in Space” (Geoff Goddard), and suddenly also a mad version of “Johnny Remember Me” (Geoff Goddard) covered by electronic music gurus Astralasia appeared! After that, Fruits de Mer’s Keith didn’t have any other option than to also ask Astralasia’s Marc Sworfish to do a dub version of the same song… Weird, as I told you! Somehow this all still makes sense in the twisted, fishy world of Fruits de Mer where anything can happen.

So is this single any good? Yes it is! The Blue Giant Zeta Puppies use enough spacey effects to make their energetic, groovy versions pretty psychedelic and I feel the inevitable urge to jump on the table and dance my tits off! Whoah, that doesn’t (luckily) happen every day. I’ve been a big Astralasia fan in their early days when they were just an off-shoot of The Magic Mushroom Band and also liked their later stuff, so it’s really refreshing to hear them in a Fruits de Mer context. And “Johnny Remember Me” makes me feel good and is also very funny in a positive way! This reminds me to check out some of Astralasia’s recent stuff that’s supposed to be closer to their roots. The Raiders take you back to the good, innocent old times of the early 60’s when psychedelia was still just taking form in Western pop music. What a nostalgic trip. “Johnny in Dub” might sound quite out-of-place after that, but weirdly it doesn’t. I like this single!