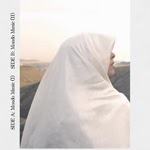 This Italian duo took their name from a bizarre movie genre made mostly by some deranged Italian directors in the 70s and 80s. The instrumentation only includes a drum set and an old Italian organ, but that’s enough to create an occult, scary, experimental and psychedelic carpet of sound that seems totally improvised. Mondo Music that is apparently their third release was originally released last year on tape (C30), but has been re-released this year on vinyl and I’m glad about it. It’s also available in digital form from the band’s Bandcamp site. The release includes just two tracks, but they are both over 13 minutes in length. The music is sometimes quite droney and experimental, but the organ that often sounds rather distorted also plays melodies. On the first part the drummer lays down some heavy, primeval rhythms and uses lots of cymbals. The second part is much more peaceful, hypnotic and meditative, and only has a quite subtle beat. Think of Pink Floyd playing “Set the Controls…” in Pompeii. Very nice! I’m looking forward to some new sounds by this instrumental duo.
http://cannibalmovie.bandcamp.com