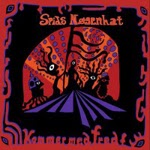 Spids Nøgenhat is a psychedelic rock band from Copenhagen, Denmark. The name of the band is a Danish translation of the highly hallucinogenic magic mushroom known as Liberty Cap (Psilocybe semilanceata). I really couldn’t think of any other name better suitable for this band that includes members and ex-members of bands like On Trial, Baby Woodrose, Dragontears, Ghost Rocket, Aron etc. and plays mind-expanding music influenced by old Danish psych rock and acid folk bands like Furekåben, Alrune Rod, Røde Mor etc. The band was originally formed in 1998 and in 2001 they released one studio album called En Mærkelig Kop Te that I fell in love with immediately. It’s magical, psychoactive, mostly melancholic and mysterious vibe has won lots of fans over the years and the album has been reissued several times. Also a very limited and collectable 7” Alrune Rod/En Drøm was put out the same year. The band reformed in 2009 and played some live shows during the following years and a wonderful live album De Sidste Her På Jorden - Live Fra Roskilde Festivalen 2011 was released in 2012. But let’s now focus on the new album that is just amazing!

“Mere Lys” is one of the most up-beat numbers on the album, and in addition to the early 70’s Danish underground vibes also has some 13th Floor Elevators and The Byrds I think. What a marvelous opener, anyway! “Lolland Falster” is a bit slower, very beautiful and melancholic track that was also made into a very nice video. This song makes the cold shivers go through my spine; it’s just that affective emotionally. There’s also a few brilliant fuzz guitar solos in there. Wow! Too bad that I can’t really understand that much Danish… The third track “Lever Vi Nu?” is just as good, and also has some organ and garage vibe like many Baby Woodrise songs. Then it’s time for the album’s brlilliant cover track and we get to hear an over eight-minute version of “Den Gennemsigtige Mand” originally by Hyldemor in 1978. This is a very touching, atmospheric psych ballad that pours deep into your soul. “Spids Nøgenhat i Græsset” is another slow, pretty and melancholic track with excellent guitar work and wonderful vocals. The mood gest even ,more laid-back and relaxed on the following, peaceful and semi-acoustic track “Jorden Kalder” thaty is one of the most beautiful songs on the album. Then it’s time to rock out a bit more during the “Vand, Brød og Te” that reminds me of their song “Det Psykedeliske Tapet” on the debut album. Some excellent melodies in this one. The album finishes off with a track called “Fred” that means peace. This is perhaps the most psychedelic song on the album and also has some experimental touches. Perfect for those strange tea sessions… Very deep, tribal and hypnotic stuff! Apart from the last track this album might appeal to the bigger audience as well due to the superb melodies and atmosphere but at least the psych freaks will love it. One of the best albums this year without a doubt!