Herba Mate: The Jellyfish Is Dead and the Hurricane Is Coming 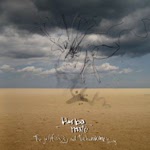 Herba Mate is a heavy stoner rock trio from Italy formed in 2001. The Jellyfish Is Dead and the Hurricane Is Coming is their debut album and was released already in 2009 but I only got it recently (okay, maybe it has been a while…). They have also released one CD EP in 2005 and played with for example Damo Suzuki, Fu Manchu and Pontiak. The music on this CD is mostly rather slow or mid-tempo, heavy and groovy and there are not that much vocals, but when there are, they’re rather tough and very suitable for the music. The band has definitely been influenced by desert/stoner rock bands like Kyuss, Fatso Jetson, Fu Manchu, GOTSA etc., but they still have something original to put on the table. Maybe not much, but some. Their playing is tight and rocking and they also have the groove which is so important in this kind of music. Some of the music is also rather progressive, like the sixth track “Bugs”. The disc ends with an experimental/acoustic track called “Sputnik”. I’m not 100% impressed with the album but it’s still good stuff with some imagination and fresh ideas so if you’re a stoner rock fanatic I’m sure you will enjoy this stuff.