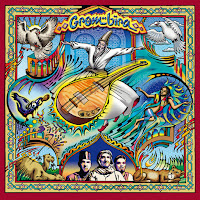 Okay Oriental space rock cadets: take out your flying carpets! Grombira is a new band playing a mix of Oriental ethnic/world music and psychedelic space rock and they sound just awesome! Although the three guys are actually from Bavaria, they do sound like they are from ancient Persia, India, Turkey or Northern Africa or someplace like that. With bass, drums, sitar, saz, oud, flute, percussion, synths and some vocals they deliver you the feel of walking through dry, sun-burned deserts to the oasis and exotic ancient marketplaces full of heady and mesmerising smells, snake-charmers and wonderous artefacts. Welcome to One Thousand and One Nights!

The album includes just six tracks, but most of them are quite long. The mysterious journey starts off with "Pürreé" that offers marvellous Arabian moods, melodies and rhythms. Right after the five-minute marker a faster, hypnotic rocking starts and things get pretty groovy before we also get some jazzy jamming. "Carpe Noctem" has a very cool ambient beginning taking you deep inside the Oriental night with all the stars shining in the night sky. This is a very hypnotic piece and even makes you want to dance in trance. Somehow brings to mind Psychomuzak. There are also some vocals in a weird language later on. One of the highlights! The shorter "Caravan" is a bit more minimal and pictures the wandering of the camels also including some field-recordings.

The B-side of this limited vinyl release begins with the melancholic and mesmerising "Goats in Space" that sounds a bit like Blaak Heat being the most Western sounding psych/stoner rock track on the album.  It also has vocals in English. Excellent! "Priest of the Horny Kong" is a cool mix of spacey trance rock and groovy Anatolian psych rock vibes and I really enjoy this one. The album is finished with the wonderful "Selma" that after it's dreamy beginning takes you into some strange, intoxicated party in a very exotic setting. This track has a somehow happy, uplifting vibe and leaves you feeling good and refreshed after all the travels across the deserts and mountains. This album is a must-have for all friends of Oriental psych rock!