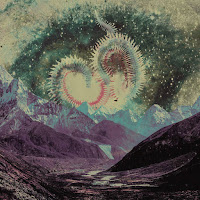 Pater Nembrot is a psychedelic stoner rock band from Longiano, Italy. I'm not that familiar with them or their music, but they were formed in 2003 and this 2016 album is their third and they also have at least one EP out. The basic group is two guitarists one of which also sings, a bass player and a drummer, but the album also features Christian Peters from Samsara Blues Experiment on synth on one track as well as two other guests on piano and "space wind".

The album starts off quite surprisingly with a short, melancholic pianoa ballad "Lostman". Like many Italian "heavy psych" bands nowadays, also Pater Nembrot mixes in some grunge as well, and you can hear some early Soundgarden and Nirvana influences on the second track "Stictch". Not a bad thing, this time. "Architeuthis" is the longest track at 10:12 and it's also one of my favourites including some atmospheric space jamming as well. Cool! "Young Rite" is an instrumental mix of Soundgarden and desert rock, and the long and adventurous "El Duende" brings to mind Pearl Jam a bit. "Overwhelmed" rocks hard and heavy being also a bit progressive. "Uknap" is a short bass piece and "The Rich Kids of Teheran" a pretty long and varied stoner/grunge number. The album is finished with the acoustic "Dead Polygon" that offers some piece and tranquility after all the hard rocking and rolling. All in all, a pretty nice album, and although not exactly my kind of stuff I find myself liking this disc. Also available on vinyl!