Vert:x - From Now to Now 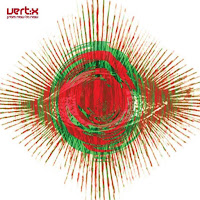 Vert:x is a psychedelic, noisy, punky & hard-rocking space/krautrock band from Chester, U.K. I've had them on my radar for about ten years now since their space captain Neil has been sending me their great, privately pressed CD-R's for review ever since they started. The band's influences include for example NEU!, Hawkwind, Can, The Seeds, Chrome, Earthling Society and Spiral Navigators. They have lately also worked with Fruits de Mer Records on several compilations that are definitely worth checking out but From Now to Now that will be released in a couple of weeks on The Weird Beard label (limited to 250 copies only) is their first full-length vinyl album. About time, I'd say! Also worth getting is the superb four-way-split album Magnetic North released last year on Drone Rock Records.

From Now to Now includes just three instrumental tracks, but they are very long... The suitably named opener "Space Junk" really rocks out in a noisy Hawkwind/NEU!/AMT style. I love the motorik beat, harsh guitar, spacey electronics and wild sax, excellent! This is the shortest track on the LP at "mere" 7:47. On the 16-minute "Suns of Ra" things get more cosmic and you can hear the heady, out-of-this-world Earthling Society influences. No wonder, since Fred from E. S. also has been playing in Vert:x. This one will leave your mind totally spaced-out and levitating... Trippy! On the B-side we've got the 26-minute (!) "Planet Of The Mindstealers" And if you still had a mind after the A side it's totally gone now. I can hear some Chrome and Hawkwind influences again on this one. This is cosmic, hazy and acid punky space rock bliss! All the tracks have been previously released on the band's CD-R releases but it feels so good to have them now out on vinyl. I hope the band will do some more fresh recordings for a second LP release soon since this is just great, mind-blowing stuff!