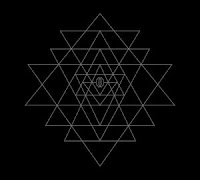 Black Willows from Switzerland gave us their debut offering Haze in 2013 and this new album Samsara was released in late 2016. The band continue in their dark, occult-inspired, psychedelic, hypnotic and heavy path and sound great. This Lausanne-based shamanic doom/sludge/stoner band sort of sound pretty original although you can influences from for example Sleep, Om, Bong, Lamp of the Universe, Arc of Ascent, Oranssi Pazuzu etc. The main emphasis usually is to get as hypnotic and heady as possible, so the heavyness comes second which is fine by me.

The bit shorter, introductory title track "Samsara" starts off the rituals slowly creating a dark, mystical atmosphere before the heavy, slow riffing and mantra styled vocals of "Sin" fill your head. This one has a very Sleep/Om like vibe and I love it. You are spellbound for eight minutes. The even longer "Rise" gets you even deeper into the dark trance and makes you see things that have been hidden from most of humanity for ages... Some cool, more energetic jamming/soloing on this one as well which is cool! Spiritual stoner rock journey for sure. "Mountain" is a bit shorter (only 5:36...) and groovier stoner/doom metal track that has some Electric Wizard/Cathedral vibes. On the 15-minute "Jewel in the Lotus" the band get very hypnotic and spiritual and I'm reminded of Lamp of the Universe and Arc of Ascent even though there are no Indian instruments in use here. Things get heavier in the Sleep vein after the six-minute-marker and you just can't avoid banging your head to the slow, heavy and doomy groove. Later on there is some more atmospheric stuff for a while... Great! The CD version also includes the 25-minute, repetative and melancholic "Morning Star" that sounds like more traditional doom metal to me with lyrics about -you guessed it- all occult metal fans's best friend Lucifer.

You can buy the CD and LP directly from the band's Bandcamp site and also the debut album seems to be available so check that out as well if you are into heavy, occult and psychedelic doom metal/stoner rock.