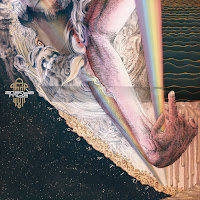 Ananda Mida is a new stoner rock band from the North-East of Italy featuring some musicians the fans of the Go Down Records already are familiar with. This is their debut album following a 7" single and I got to say this sounds pretty awesome and also quite original. I like the interplay between the two guitarists as well as the drum section and the singer is also very good. As an extra bonus the album also has a cool organ/synth player but he's not playing that much. I enjoy the sound that is not really that overtly heavy but sort of 60s/70s styled reminding me of bands like Wishbone Ash or Blue Öyster Cult.

Most of the songs are closer to late 60s/early 70s classic/hard rock bands than the 90s stoner/desert rock bands that the Italians seem to often worship. This band even has a sense for melody and emotion, although they of course also know to rock out hard and jam. There is also a bit more experimental stuff like the instrumental "Passavas" and some more progressive songs like "Ors". For example "Askokin" comes closer to modern stoner rock and works out just fine too and the groovy "Heropas" could be an Brant Bjork out-take. The last track, the instrumental called "Occasion" is perhaps the most psychedelic piece on the album. Another cool rock band out of Italy, check them out!