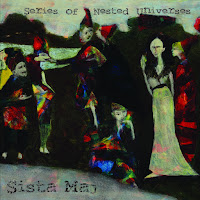 Okay, since it is the last days of May now it's about time I review this double CD by three excellent Stockholm based musicians. Sista Maj is formed by Andreas Axelsson (drums and percussion, also for example in Eye Make the Horizon and Lisa Ullén's Group), Mikael Tuominen (bass, baritone guitar, electic sitar, in Kungen's Män) and Jonathan Segel (electric guitar, violin, organ, synthesizers, bass, in Kungen's Män, Øresund Space Collective, Camper Van Beethoven,  etc.). The three-piece spent a studio week together in September 2015 to explore the possibilities of free improvisation and this session spawned the eight long pieces on this album.

The overal feel of this album is rather laid-back, dreamy and tranquil although also dark and at times harder and even oppressive. There are some experimental,  jazzy and electronic vibes in the mix as well, but most of the stuff could be described as psychedelic, droney space/krautrock jamming. Some of it reminds me of Kungen's Män but no wonder, since two of the guys are also in that band. The music is quite different to for example Øresund Space Collective, though, since this is not that spacey or psychedelic but still very good. Okay, the faster "It Never Ends" could almost be an Øresund Space Collective jam as well if you added tons of space sounds... Most of the time the tempo stays pretty slow but for example on the longest (25:40!) track "A Very Heavy Feather" they also speed up a bit and the going gets quite rocking and heavy as well. It's really hard for me to point out any favourites since all the tracks are so different and I like them all. Let's just sum this up by saying that this is a really good, BIG package of improvised progressive psych music that will go down well with those of you who enjoy adventurous, instrumental free-form music.