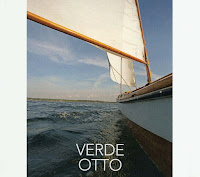 Verde is Mika Rintala's experimental electronic/ambient/avant garde/jazz/musique congrète project and I've reviewed some of his earlier CD-R/CD albums that he has been putting out since the late 90s. Mika is famous for his home-made electronic musical devices that make strange sounds. He has been collaborating with lots of Finnish left-field musicians like several ex and current Circle members (just check out Ektroverde for example) and this CD also features the 60s/70s counter culture hero Otto Donner (R.I.P.), Rauno Nieminen, Esa Santonen, Janne Tuomi, Tapani Varis, Jyrki Laiho and Seppo Istukaissaari.

This latest album dedicated to Otto Donner who passed away in 2013 includes 11 totally improvised tracks using what ever instruments were available. The music was recorded at Donner's place to an eight-track recorder and later mixed by Rintala. Otto mainly plays his Steinway grand piano adding also some vocals and horns. There are lots of acoustic, also archaic instruments which gives the album a wonderful, ancient folky edge although it's mostly electronic and experimental and piano is ofter taking the lead role. You can also hear some field recordings like sounds of the sea, birds etc. My favourites include the almost seven-minute, folky "Klyyvari" (nose in English), the jazzy and psychedelic, even longer "Hunsvotti", the short experimental electronic piece "Knaapi" and the atmospheric, trippy 15-minute "Luuvartti". This is a great homage to Otto and what he stood for but also a very interesting, creative as well as enjoyable album as a whole. Check it out!