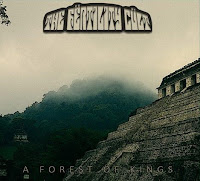 A Forest of Kings is the third album by Finnish psych/prog/metal group The Fërtility Cült. I remember reviewing their first CD and maybe also some CD-R EP by them years ago. Their sound is a sort of weird mix of psychedelic rock, doom, stoner, metal, progressive and post-metal/rock. Their instrumentation also includes keyboards and jazzy saxophone so the soundscape really is pretty varied and vast. The vocals are clean and melodic and pretty good. I'm having problems trying to think bands that would sound like them so I guess that means originality (or I just have not heard their biggest influences...). Some of the most progressive parts do bring to mind early King Crimson a bit and the beautiful, atmospheric stuff (like "The City on the Edge of Forever") remind me of Porcupine Tree or some melodic, melancholic metal bands like Anathema, though.

The 47-minute CD includes five longs, adventurous tracks. My favourite is maybe the second song "The Path Is Clear" that I also have used in my Astral Visions Mixcloud Show. This one also has some cool solo guitar work and it has a nice groove and vibe and lots of different stuff. "God of Rain" is great too in all its slowly creeping heaviness and starts to rock like Iron Maiden later on. The last, melodic and powerful song "Cycles of Time" somehow brings to mind Amorphis. I like this band and their latest album and am looking forward to see them live tomorrow at Semifinal in Helsinki where they play with the amazing space rock band Sendelica from Wales. Be there!!!