Soft Power - In a Brown Study 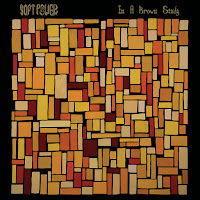 This is the first album by Helsinki-Based progressive psych/folk/pop/rock band Soft Power. It was recorded and mixed during quite a long time and the band has evolved along the process so the album has flashes of different styles. Some might find this a problem but I think it's good to hear different sides of the band as long as all the stuff sounds this cool. The band compares themselves to bands like Pärson Sound, Fläsket Brinner, Wigwam, Bo Hanson, Ragnarök and Can and there are similarities alright.


The album starts off with the groovy, jazzy and laid-back instrumental "Aavaa # 1 / MF". Very nice! Then it's time for some weird forest folk with the experimental "Mitä on kätketty meiltä" that has psyched-out narration in Finnish. "Ääntä Wallista" is another jazzy, progressive instrumental with a sublime vibe and "Kulma Klubi" continues along the same path but in a more relaxed, very late 60's way. On the more boogie-like but still rather soft "Sisämetsä" the band sounds a bit like Janne Westerlund/Plain Ride or Death Hawks and I like this instrumental a lot. It could have used some vocals, though. "All in All" is a darker, bit heavier and longer hypnotic track that in more in the Velvet Underground vein. It also brings to mind some of the new dark shoegazer psych bands like The Myrrors. We also get some druggy, dreamy vocals on this one which is great. Maybe my favourite on the album! "Afterglow" sounds at first a bit like stoner rock with its heavy, fuzzy guitar riff. Later on the song gets more relaxed with vocals, percussion and I'm in psychedelic heaven. Okay, another highlight for sure. "Aavaa # 2" ends the trip with some beautiful, tranquil vibes also including some strings and wind instruments. All in all, a great, varied album that comes warmly recommended for all lovers of old school style psychedelic rock.