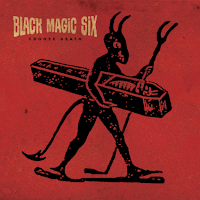 Black Magic Six is a trash/blues/garage/psychobilly/punk duo from Helsinki formed in 2006. Choose Death is their fifth outing and released today on Svart Records. I got to admit not having heard the duo's previous albums that much but their energetic live shows have been very entertaining. No wonder they seem to almost constantly play live in Germany and other parts of continental Europe. Live they are just guitar/vocals and drums duo but this new album also features some guests on solo guitar, banjo etc. which makes it sound fuller of course.

The groovy opener "Dance with Me Satan" gets closer to stoner rock because of the pretty heavy, fuzzy guitar riffs and I'm sure it makes you dance. "Shake Shake Shake" does the same to you but in a more traditional rock'n'roll / psychobilly / twist way. "Midnight" is a faster graveyard garage rock tune and "All Night Long" that also has some cool solo guitar work brings to mind Tom Waits or Tuomari Nurmio. The bit longer (3:47) "Red Cloud"  is a hazier and even a bit psychedelic song and one of the highlights for me. "Grease the Machine" rocks out like old 80's Finnish rock/rockabilly group Melrose and also has some backing vocals like of course some other tracks as well. On "Raw" the going gets pretty trashy and swampy and why the hell not. "Better Run Fast" has a nice caveman voodoo beat and also some sax if I'm not mistaken. "16 Tons of Misery" features Janne Westerlund from Pharaoh Overlord/Circle/Plainride and it rocks really well too. Janne of course has previously played with the drummer Japa in legendary 90s band Sweetheart. The singer/guitar player Taskinen is most known for his long career in seminal Finnish death metal/grindcore band Disgrace that also has turned into more punky/garage direction since the early days. The album is finished with the bit more melodic and atmospheric "Golden Jackal" that somehow reminds me of Roky and the Aliens. One of my favourites for sure and a great way to end this raw, energetic and pretty straight forward garage rock album. You can see the band live two times today: once for free at Levykauppa Äx on Fredrikinkatu at 17:00 and later at their official record release party at Lepakkomies. It's time to boogie like there's no tomorrow!