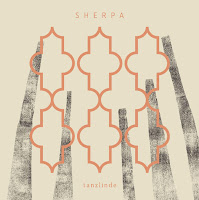 When you hear the word "sherpa" you are immediately reminded of high Tibetan mountains etc., but this new band is actually from Italy. Sherpa has been labelled as psychedelic, krautrock or space rock but I don't really agree. I would rather say they play an interesting mix of indie rock and pop with some Eastern, ethnic folk, progressive and psychedelic overtones. Some of the first tracks are pretty light and happy, but there are also deeper, darker and more meditative moments like the fourth, title track "Tanzlinde" and the following "Sherpa", one of the highlights. At times I also hear echoes from bands like Dead Can Dance. The male and female vocals, usually in English, are great and the instrumentation is varied enough.

The album includes ten relatively short songs so don't expect any long jams on this one. The longest track is the beautiful and melancholic "Loto" that sounds like a mix of The Cure and some ethnic folk rock band. My favourite still is "Bigfoot" that has a mysterious aura and brings to mind bands like Grails. The last two tracks also have some post-rock vibes. All in all, an interesting mix of styles, but I think I have to listen to it more to really get into it. The album was released already half a year ago, so sorry for the delay... Available both on CD and vinyl.