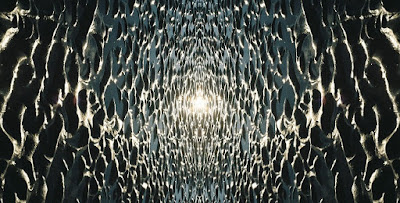 Astralasia has been one of my favourite ambient/electronic acts since separating their celestial body from their old mothership The Magic Mushroom Band in the beginning of the 90s. During the White Bird era around '98 their music went a bit too commercial for my taste, but luckily Swordfish with his fellow astral travellers have released some totally amazing stuff lately on labels like Tonefloat and Fruits de Mer. I really enjoyed the 2014 FdM 2LP Wind on Water that sold out quicly. Oceania is another 80-minute masterpiece of psychedelic, hypnotic, usually soothing soundscapes from the primeval sea that is the ancient place of birth for all of us and the life itself.

In addition to huge array of synthesizers, sequencers and who knows what kind of weird electronic wizardy the album also includes for example very nice electric guitar, sax and electric violin, if I'm not mistaken. In the early to mid 90s Astralasia became famous for their use of spoken world samples, and there's a litte bit of that included here as well. This is still instrumental, atmospheric electronic music for the most part. You can just put this album on, close your eyes and float along with the cosmos. In a sense time does not exist, there is only now where the past and the future are intervined. I really like that place. This album is perfect for those late chilled-out moments but also works on a lazy Sunday morning, for example. I won't go through the tracks this time, but some of the titles include "Tangerine Skies", "Astral Voyager", "Mushroom Heartbeat" and "Time & Tide Eternal", just to give you some kind of an idea. Do yourself a favour and get this album if you can still find it, since it's already sold-out on pre-orders on the label. There will also be a very special version limited to 200 copies that will include an exclusice 7" among other things...