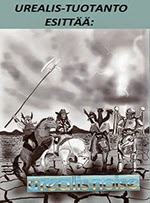 This is a cool and deranged compilation tape including one track each by four different Finnish rock bands. It's all pretty noisy and lo-fi, so there is a certain unifying factor in there. Atom Mouth Gimlies start off the A side with a live version of their track "Wig Pacer". I had never heard this lo-fi punk/garage rock band before, but they play fast, loud and hard for sure. Ride for Revenge is a black metal band, but their offering called "Soul Abortion" is (luckily) closer to primitive early black meal like Hellhammer than the modern version of the genre that I personally have no interest in. It more or less has just one slow riff with some occasional outbursts and since also this track is a live recording (from North Karelian Black Winds 2, Kontiolahti, Finland, 2nd of August 2014), the sound is pretty distorted and muddy. It doesn't really matter, though.

On side B things get more psychedelic and interesting for me... Räjäyttäjät and their leader Jukka Nousiainen has been a real underground rock hero here in Finland for a couple of years at least, and here Räjäyttäjät also features the insane impro vocals by Kalevi Helvetti, an infernal alter ego of Pertti Kurikka from punk band Pertti Kurikan Nimipäivät! Their track "Painajais-Rock'n'Rollia & Huonoa Seuraa" also includes some spacey synth by Kalle Pajamaa on some weird and wild tape manipulation and delay. The end result is pretty far-out! Hazard Wings is a band influenced by Hawkwind, psychedelia and punk rock, and I really like their Interstellar Torment release form 2012. "Too Far" is an previously unreleased track that has a slow beat, majestic lead guitar work, screamed vocals and mind-blowing space sounds. The tape is worth having for this weird track alone, I think. I bet this is a very limited edition but the tape is still available for example form the Ektro web shop so hurry up.