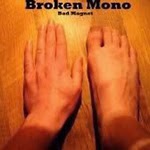 Broken Mono is a psychedelic one-man music machine of a guy named Mike Dmytruk. He's living in Peterborough, U.K. Bad Magnet is his third album under this monicker and he has played in bands before. This great album is available on CD-R and as a download, no vinyl I'm afraid.

We get ten relatively short tracks on the CD-R. The music has elements of garager rock, post-punk, guitar oriented indie rock, Velvet Underground, and psych rock. Dmytruk uses electric guitars, bass, (programmed) drums and some keyboards and sings in a sort of punky manner. One of my favorite tracks "You Burn Like a Sun" brings to mind the great Nick Riff, if that gives you some idea of what I'm talking about. This somehow also sounds a bit like the bed-room recordings of Nick Saloman (The Bevis Frond), although not just as good. The quite minimal and mellow "Soft Hammer" is a bit more electronic in nature. "Day By Day" has a cool 60s psych pop vibe, one of the highlights for sure. The last track "You're a Spaceman Now" has some experimental, weird edge and is pretty spaced-out. This is a rather varied, uneven album that some great songs and some okay songs, check it out.