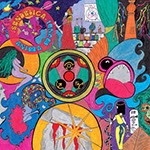 This is the brand-new Sendelica studio album, the first one since Kalidoscopic Kat in 2013, if you don't count the compilation and live albums in between. The very enjoyable, instrumental and psychedelic album features the following personnel: Pete Bingham: guitars, electronics, Colin Consterdine: synths, rhythms, atmospheres and sonic spells, Glenda Pescado: bass, Lee Relfe: sax, Jack Jackson:drums,  Lord Sealand: Theremin, Virginia Tate: flute and keyboards on "Searowhit" and Gregory Curvey: extra guitar on "The Pillar of Delhi". The band just seems to get better and better with age, if you ask me...

There are eight new tracks on the CD-R and seven on the limited LP (available in different variations). "The Craeft Worker" starts off the party in a rather laid-back, jazzy-electro mode. "Master Benjamin Warned Young Albert Not to Step on The Uninsulated Air" is the longest track on the album at 12:19 and also my favourite rocking out in the hypnotic kraut rock vein like Can also including lots of spacey sound effects, a bit heavier guitar, nice sax etc. Very cool! "The Pillar of Delhi" begins in an ambient mood and stays slow, tranquil and soothing. Just beautiful! "Azoic" is another peaceful, atmospheric track, although it grows after a couple of minutes. On "Baalbek Stones" the band gets heavier and more rocking and I really enjoy that. It also has a groovy, electronic background and jazzy sax to make things more interesting. "'The Breyr', 'The Tabogion', And 'The Cabthion'" is by far the heaviest track, so the spacey, psychotropic and ambient "Searohwit" soothes your soul in blissful way after that. I really like the Nik Turner-like flute on this one! The CD-R (limited to just 200 copies) and digital download also feature a bit weird, rather minimal and experimental but still pretty track called "The Hedge Witch". There's also a DVD version available including all the tracks with video footage. I love this band!