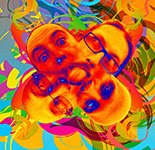 This is the second CD by UK jam-based instrumental psych/space/prog/funk rock band Glowpeople that I have heard and reviewed. They have been playing live at the UK festival scene for a few years now and there has been some clear progress in their music. I'm still often reminded of the Ozric Tentacles, but Glowpeople do have a jazzy, funky vibe of their own. The music is usually rather cheery and danceable and also has elements of dub, ambient, electro etc. Must go down well at cool psychedelic summer festivals like Kozfest!

The CD includes 10 tracks ranging in length from 3:45 to 7:37. The rather slow, mellow and dub styled "Gap the Mind" starts off the spacey celebration. The psychy synthesizer sounds and maybe the overall vibe bring to mind 90s psych band Tribe of Cro, anybody remember them? Later on we also get some spoken numbers which is sort of strange. On "Happen" the band gets more jazzy with some horn but also more hypnotic and sort of kraut rocky. Very cool! The US band Mushroom brings to mind. "Tie Dye Sky" is also pretty jazzy and the weird small voice samples and spacey synth swooshes make me think of Gong. Things get more intense later on with some tight space rocking and hot solo guitar work, excellent! "Gorilla Salad" is a weird track title but so is the track itself... Then it's time for a rather experimental and percussive "Trod" that stays relatively minimal and has some trumpet again. "Distlilled" remains me of some of the 80s jazz/rock fusion bands (but in a nice way!), and "Skworked" has a mysterious, magical mood that I really like. The shortest piece "Medusa" is the most electronic sounding of the tracks and I dig that too. "Touch It" is the ambient space track of the album and gets some tribal percussion added later on. Also the last track "Abstract" has a similar airy, ambient vibe with just repetitive percussion, synthesizer waves and trumpet. One of the strengths of this band is its looseness but it can also be a bit of a burden since sometimes you would like the tracks to lead you somewhere instead of just making you linger in the ether but that is fine with me too. Check them out!