The Janitors: Evil Doings of an Evil Kind 12" EP 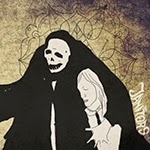 The Janitors is a band from Sweden playing dark, heavy and hypnotic psych rock. They have released one album on Cardinal Fuzz and some mostly digital EP's etc., but I haven't heard that much before. This 12" was put out last autumn so I'm a bit late again, sorry folks... This four-tracker reminds me of recent bands like Cult of Dome Keller, Dead Skeletons, Sonic Jesus, The Underground Youth etc., so there's lots of echoes of post-punk and Gothic rock as well as shoegaze (at least Spacemen 3), noise rock and drone.

First we get a long, dark and hypnotic mid-tempo track called "Greed". I like the reverb-drenched guitar sounds of this band. Things get louder and noisier later on, but all they really need is one simple riff. The four-minute "Black Wheels" has more melody and song structure, and actually sounds a bit like (earlier) The Black Angels, so there's a certain garage psych vibe in there too. A Great song! "Here They Come" has a cool drum-beat and again a hypnotic, dark vibe with heavy, psychedelic guitars and bass. This might freak you out a bit, quite scary and powerful stuff... The last song "There Will Be Blood" is a bit faster and reminds me of Cult of Dom Keller. It has some great riffs, dark, monotonic Gothic/horror vocals and a bit punky vibe. Now I'm hitting myself for not buying the limited edition of their first LP since it's now way too expensive... What a great, powerful band!