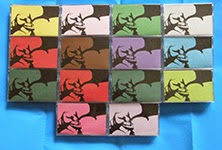 Sonic Temple Assassins is and experimental psychedelic noise rock project of Jani Hellén from Tampere, Finland with some foreign collaborators. This limited edition tape that was released with several different coloured covers on recycled tapes was born when Jani visited Ireland in late 2013 for a short tour backed by Irish band The Jimmy Cake. One night in Dublin, Gavin Prior (the head of Deserted Village lable) organized an improvisation session with Jani and himself, and the basic tracks were recorded. Later Gavin added some tracks and his friend Ferguson also played some sax to give the music a more free jazzy vibe, while Jani rearranged and edited the material in Finland.

There are eight weird, instrumental tracks on the tape. Some of it is pretty jazzy, but there is also noise rock and even some Faust-styled hypnotic and industrial jamming as well as experimental ambient soundscapes. You never know what the Sonic Temple Assassins will offer but it's always strange and intriguing. If you need your music to have super high quality sound this is definitey not for you but if you are interested in some experimental sounds deep from the underground this might well be your thing. But first, you have to track down a copy, of course..