Spurious Transients: Portraits of a Landscape 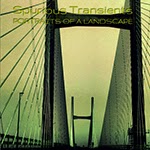 Spurious Transients is a kraut rock oriented experimental/avant garde music project of multi-instrumentalist Gavin Lloyd Wilson from Wales. Most of the tracks on this CD have drum machine and there's a certain modern, electronic vibe on it. Gavin has been inspired by German acts like Neu!, Faust, Can, Cluster, Harmonia and Kraftwerk, and has also been playing bass for a while with his Welsh friends in space/psych rock band Sendelica. Portraits of a Landscape also feature some guests on drums, bass, keyboards, Cubase trickery and vocals.

The mostly instrumental has been divided in two parts. The first five tracks reflect the contemporary industrial landscape of Wales and the last four the ancient landscape of the nature. The very cool, kraut rock -styled "Modus Operandi" is my favorite of "The Industrial Operandi" section. The very industrial sounding, experimental and weird "industry/Catastophe" reminds me of Faust. You can hear the sounds of machines etc. and there are also lots of sampled spoken word. "Baglan Bay (Salakapakka Sound System Remix)" offers some cold, ambient industrial vibes.

The "In Harmony with Nature" part starts off with the beautiful and tranquil "Under the Same Stars" that has wonderful female vocals by Ghost Dust. I like the mystical, droney vibe of this song. "The Parrog" is very nice stuff too, although only lasts for two minutes. "Glacial Express Way" is the longest track on the album at 8:43, and has some psychedelic, dreamy guitar, a slow, distant beat and synthesizers. Very nice and psychedelic! "Poppit" ends the album in a airy, pretty and a bit folky style. I definitely prefer the "nature" section of the album but there are some really great moments in the industrial part as well, so please check this out!