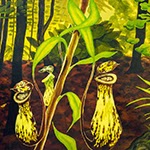 Finnish progressive pop/rock/psych band Uhrilehto will release their third album this Friday. They will also perform a free record release gig in their hometown Turku, and after that there are a couple of more gigs in Kotka and Helsinki. Everybody in Finland knows the main songwriter Kauko Röyhkä, who's been one of the icons of Finnish rock music since the early 80s as well as successful writer. In Uhrijuhla he's just one of the members though, playing guitar and singing on some songs. His partner Olga is the main singer like on their eponymous debut album. There have been some changes in the line-up, and Kimi Kärki (ex-Reverend Bizarre, Lord Vicar, Orme) is the new guitarist and Olli Kauniskangas and Kimmo Laine (from 500 kg lihaa) play bass, guitar and keyboards.

The album starts off with the short and minimal "Syksy" ("Autumn") that just has some quiet organ sound and wonderful, clear vocals by Olga. "Salaseura" ("A Secret Society") is a slow, a bit melancholic and mysterious sounding song with great vocals/lyrics. I love the bit heavy guitar tones on this song. Starting off with some bird-song, "Uhrilehto" is the first single track and a very nice piece with great variation on the soft, folk rock parts and the more rocking sections. Check out the cool video directed by Mr. Kärki. Nature seems to be a big influence on this band like the whole cosmos, the occult etc. On "Dyyneillä" the band gets heavier and Kauko does the vocals. This sounds like some of his solo stuff, not really my favorites on the album although not bad at all. I must give extra points for the occasionally slightly psychedelic vocal effects, and the mind-blowing guitars at the end. "Juokse poika juokse" is a softer pop song with a groovy chorus with some distorted guitar. Nice! Kauko sings again on "Pohjoinen" that tells about the life and problems of the Northern parts of Finland. This rocks out in a rather weird way. The most beautiful "Hiljaisuuden luostari" is one of the highlights and has some acoustic guitar, mellow keyboards and just wonderful vocals by Olga. The drums and bass join in after two minutes, as well as some more guitar, but the track stays slow and rather tranquil. This reminds me of Kimi's dark progressive occult rock band Orne that I really love. Must be written by him. "Puutarhassa" is another winner. The beat is like from "White Rabbit", and the song is arranged and mixed to perfection. Some great guitar on this one again and rather psychedelic vibes especially towards the end! The last, long track called "Verenpunainen" ("Blood-Red") has Kauko on vocals and I really like this dreamy but dark and heavy song. The overall sound is quite full and there's lots of different stuff to dig. Finally there's a short outro with Olga and organ to lighten up the rather dark and mind-blowing vibe of the song. Excellent! This magical album is definitely worth checking out, even if you don't understand the great lyrics.