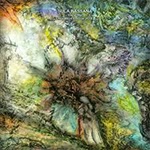 One of the highlights for me at Roadburn Festival in 2014 was without a doubt the first ever live set by Sula Bassana. Dave Schmidt has been a musical hero for me since his early bands like Liquid Visions and Zone Six. I have followed his career in psychedelic space/kraut/trance rock music very carefully buying every release that he puts out with his various bands like Electric Moon and Krautzone. His solo albums have also been so brilliant, that I was really looking forward to this gig. Sula performed playing guitars, synthesizer, Mellotron and effects along with his partner Komet Lulu on bass and effects, Marcus Schnitzler on drums and Rainer Neef on guitar & effects. The atmosphere had really built up and the band was in hyper-energetic and psychotic mode and jammed and freaked out. What a great concert! What we have here is almost the whole show on LP and CD.

"Rainstorm" starts off the album with 13 minutes of hypnotic, psychedelic instrumental mayhem that gets rather intense at times. "D-Light" cools things down a bit with some nice, floating space atmospheres. It starts to rock in a heavier way but stays slow and spacey until it gets faster towards the end and blows your mind! The longest track is "Dark Days", the title track from the latest Sula Bassana album lasting here for 18 minutes. It happens to be me favourite track on the album so I remember being totally enthusiastic when I recognized the first riff! I still get the same feel listening to this now, and when the Mellotron hits the cold shivers go through my spine, splendid! This is a dark, psychedelic and mysterious masterpiece for sure. The album is finished with almost six minutes of "Alienfuzz" which begins in a blissful, ethereal manner but soon turns into heavy space fuzz orgy! Great way to end this album. The CD is already available and the limited marbled vinyl will be ready soon so be sure to buy a copy before it's gone!