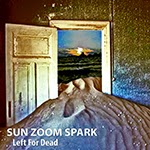 This album started already in 2001 when John Galuska (ex-Cesare's Dog) asked Sun Zoom Spark guitarist/vocalist Eric Johnson to help create music for a larger concept idea called Left for Dead. Galuska wrote poems around the subject of death and renewal as well as recorded hours of abstract sound collage for the project. The members of Sun Zoom Spark then one night recorded a full hour of psychedelic improvisation but then the project was shelved for 13 years. This spring Johnson revisited the recordings doing editing and overdubbing the material since he found it was too good to really left for dead... And the end result is pretty stunning!

There are 12 tracks on this CD featuring three shorter, minimal and experimental tracks ("Transmissions I, II & III") and also a couple of over ten-minute-long pieces, a prototype of "Jewel of the Seven Stars" that was later recorded for a Black Sun Ensemble album and the great, closer to 17-minute progressive and varied title track of the album. Three of the other tracks are in between eight and nine minutes in length, as well. Most of the stuff in pretty slow and atmospheric and some of it has Pink Floyd vibes, the mellow eight-minute jam "Left for Life" in particular. There are lots of psychedelic sound effects and synthesizers, which is always a good thing if you ask me... "Masterpiece by Midnight" is a little more upbeat and groovier. "Volcano" is sort of heavy blues, I guess, but also rocks out. The album is finished with the airy and nice "Return to Swim". This is a very nice album that works best on headphones in nocturnal chill-out sessions with your eyes closed and mind open.

You can listen to the second track "Round Again" over here: