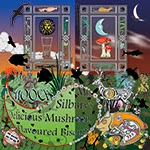 This is the 25th release in 22 years by UK based band Mooch led by Steve Palmer. Steve's style has changed in between ambient, electronic, 60s psych pop, space rock, progressive, folk etc. but this new album, the first to be released on vinyl, is definitely (and luckily, if you ask me!) more on the space rock side, although not heavy space ROCK as we know it. The album features some great quests (Gary Moonboot, ex-Magic Mushroom Band etc., Alex Pym, Dream Machine, Bridget Wishart, ex-Hawkwind etc. and the space rock violinist Cyndee Lee Rule).

The almost instrumental album starts off with the rather progressive, very nice "T Minus None" that has some superb solo guitar work and spacey synthesizers. This somehow reminds me of the early Ozrics stuff. My only small complaint is the use of programmed drums once again. "The Golden Rule" has more Tangerine Dream vibes with the cool, hypnotic sequencers and soaring keyboards, and later on the Simon House styled violin really brings the track to life. Excellent! "Mellifluo" has a cool, laid-back, almost jazzy mood and spacey sound effects. Also "Clouded" is very mellow stuff with just some cosmic synthesizers. The very psychedelic and floating "The Great Retsina Jam" is one of the highlights and again features lots of great synth work as well as some acoustic instruments, for example. "Pstrings" starts off with a short piece of cool vocoder stuff and a groovy beat, and soon we'll also get some very nice, elegant solo guitar work by Alex Pym and of course spacey synthesizers and sequencers. The album is finished with "Another T A P", that has an electronic, pulsating beat and also very nice, mellow vocals by Bridget. I think I can hear some of Steve's ethnic instrument collection in the background, but synths and keyboards are in the front. This is a very nice ending for a great LP, now can I have some more of those biscuits, please?