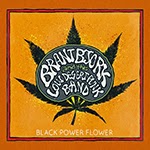 I have to say that I've never been a die-hard Kyuss fan even though I like the seminal desert/stoner rock band and also most of the band projects and releases of all the ex-Kyuss members. For this new 2LP/CD/digital release ex-Kyuss drummer Brant Bjork has recruited a really killer backing band and the album rocks in a heavy, groovy, smokey and even a bit funky way. This is definitely the best Brant Bjork solo album that I've heard, and proves that the man still can write great tunes, sing and rock out with his guitar.

The first track "Controllers Destroyed" starts of slow and heavy like a homage to Black Sabbath. Soon we get faster stoner rock pounding and I'm excited already. The chorus is great too. I'm reminded of Fu Manchu a bit, and no wonder. What a great opener! I really like the dirty fuzz guitar sounds on this album. "We Don't Serve Their Kind" has a groovy beat and rocks out too. "Stokely Up Now" and "Buddha Time (Everything Fine) get closer to early 70s US hard rock I think, but are still cool, heavy songs. The main verse "Soldier of Love" somehow brings to mind Thin Lizzy, but "Boogie Woogie on Your Brain" is great stoner/desert rock again. "Ain't No Runnin'" is the shortest track on the album at under three-minute in length and has some pretty cool, inventive hooks and riffs. "That's a Fact Jack" is the funkiest track on the album and not bad at all. Then we get some mellower blues on "Hustler's Blues", but the track starts to rock out hard in the end with some great solo guitar. Phew! The last track "Where You From Man" is the longest at 8:12 and also the most psychedelic so obviously my favorite... It has a heavy boogie beat, spacey psych effects on the vocals and some nice jamming. A really good, mind-expanding ending for a great album! Warmly recommended for lovers of hot Palm Beach desert rock.