Seven That Spells: The Death and Resurrection of Krautrock: IO 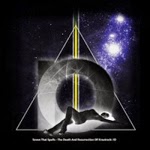 This is the second part in The Death and Resurrection of Krautrock Trilogy by Croatian progressive heavy psych/kraut/space rock band Seven That Spells. The band started out more like a stoner rock band all those years ago, but soon changed their style inspired by Acid Mothers Temple and others. The band-leader Niko Potocnjak (guitar) is the only constant member since the beginning and this CD/LP also features Nikola Babic on drums and Jeremy White on bass and vocals as well as guests Albin Julius on synths, Hammond and kazoo and Nikola Urosevic on throat singing.

The album begins with the fast and furious “In II” that has lots of energy and great, technical playing by the trio. Towards the end the instrumental gets more psychedelic and moodier. The long (18:28) “Io” starts off with some great, ethnic sounding harmony vocals, that are playing an important part later on as well. This is a slower, soft of folky track with excellent, hypnotic and ancient kind of vibe. After a very tranquil, ambient part in the middle things get more energetic but the Eastern ethnic vibe is maintained even during the great lead guitar work and rather progressive parts. What a great journey! “One” is just a short experimental piano piece. “Burning Blood” is the second longer track of the album at over 14 minutes in length. This might be my favourite and also has hypnotic, mantra-like harmony vocals and throat singing to a great effect. I’ve got no idea in what language the vocals are on the album but they sound very cool. The track has a pretty mystical and dark vibe and gets pretty fast and chaotic later on. The AMT influences are again quite apparent but so what since this really works! The last piece “Out II” is another majestic, repetitive and hypnotic piece that ends with some echoed human voice and synthesizer. The CD is out now and the LP version soon too so why don’t you get yourself a copy since this sounds really great!