Census of Hallucinations: The Nine 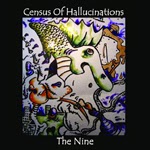 Released this spring, The Nine is the latest album by Census of Hallucinations, an English band that has been around for around 15 years now I believe. The band is led by the couple Tim Jones and Terri~B, who also run the Stone Premonitions label. They have been sending me some great stuff to review for years and I’m grateful for that… The new album features superb lead guitar work by John Simms (Clear Blue Light), a veteran in the progressive/hard rock universe. Other musicians are Kevin Hodge (acoustic guitar), Maxine Marten (backing vocals), Mark Dunn (bass) and Paddi (drums and percussion).

The Nine includes nine new songs. The album starts off with a pretty laid-back, soulful and deep style with “Signature”, “The Emperor” and “Delivering the Goods”. There’s a lot of acoustic guitar, and Tom’s intense vocals somehow have even more message and meaning than before. Especially the third song has a strange, a bit ghostly vibe. On the shorter “All about Harry” the band gets a bit more positive and even funny, but the vibe still is rather strange. “Cold as Trout” sounds a bit like 70s Pink Floyd with the mellow beat, acoustic guitar, soaring electric lead guitar and relaxed male vocals and female backing vocals. The rather experimental, spacey and weird “Timelessness” includes an interesting narration. “The Crunch” is a mid-tempo pop/rock piece about numbers ending with a very psychedelic and spacey manner… The theme continues with the pretty weird and spiritual “A Most Remarkable Number” and the final chapter “The Truth Inverted” completes the otherworldly, strange feel of the album in a great way. No hard space rocking this time, since the whole album is rather slow and relaxed, but the weirdness and interesting message keeps you awake and alert… It all sounds amazing too!

Listen to “A Most Remarkable Number”.
Lähettänyt Unknown klo 9.44