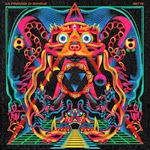 This is the second LP by Torino based septet (two guitars, two basses, one clarinet, one synth, several effects, drums and percussions) La Piramide di Sangue. I fell in love with their first album Tebe that had a mysterious, psychedelic, unique and somehow occult vibe, and Sette continues similar paths with its seven instrumentals. The melodies (especially on clarinet) give the band a bit Eastern folk music mood, but this is often labelled as psychedelic kraut rock. It is hypnotic, otherworldly and psychedelic for sure, but to me closer to ethnic world music than classic kraut rock or kosmische music. Anyway, what really matters is that the music these guys play is really good and has a twist of its own!

“Baciati dall'Acido” starts off the LP in a rather laid-back, magical mode. There some more exploding, rhythmic stuff later on. “Jetem” is a rather heavy, dark and repetitive track that also has some more progressive and experimental elements. “Non e´ mia e´ di Dio” has a nice, energetic groove that somehow reminds me of Lumerians. There are also some spacey effects to add that feel. The end part is slower and dreamier stuff. Then it’s time for the mid-tempo piece called “Aperti alle Sette” that has some cool drum/percussion patterns. One of my favourites is “Reggio Galassia” that has a heavy, monotonic guitar riff that reminds me of Circle. It also has similarities with the more aggressive works of Black Sun Ensemble. “Esoterica Porta Palazzo” is a cool, Eastern-tingled track that brings to mind images of snake charmers or magicians. The over eight-minute long “La Guerra non Finira´” ends the album in a pleasant, mystical and hypnotic way. Very nice! Just get this limited LP before it’s gone.