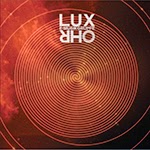 E-Musikgruppe Lux Ohr from Turku, Finland, is your perfect Time Machine to the cosmic and ambient electronic music of old-time Berlin-school masters like Klaus Schulze and Tangerine Dream.  This is their second studio album on Svart Records and before that they have released one live album.  Live performances seem to be very important for this great band and also Spiralo first began as an improvised live set they played at their concerts during the late 2011 and early 2012. Lux Ohr then decided to re-create the set and release it as their second studio album. Like Kometenbahn (2013) Spiralo is only out on limited vinyl edition (300 x black and 200 x transparent red).

If you are  fan of experimental, adventurous & spacey ambient music played with analogue and digital synthesizers, sequencers, drum machines, organ, keyboards & a little bit of atmospheric guitar, you will love this stuff. Your personal trip to the moon and beyond is guaranteed when you put a copy of this album on your turntable, turn the lights off and just chill out to the music. The album includes just one instrumental track "Spirallo", that is decided in equal parts on sides one and two. Side one is full of very hypnotic and also psychedelic synth/sequencer etc. moods, and I can only hear some gentle guitar after about ten minutes. The track cools down for the last three minutes or so, and you can hear the guitar more clearly. Excellent! The space journey continues on side two, first in a pretty minimal and experimental way. Slowly some beat comes through and we speed through the galaxies with lasers blazing. This part also has some superb e-bow guitar by Kimi, great! What a great album, just go to their Bandcamp site and listen for yourself!