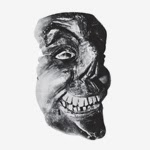 Here’s a new 7” single by the Italian experimental occult psychedelia band Heroin in Tahiti. I really liked their Death Surf album that was released on Boring Machines in 2012 and this new limited release sounds very cool as well. On side A we’ve got the title track “Peplum” and it’s an electronic, hypnotic, droney and atmospheric number. The surf guitar gives a bit Italo-Western vibe to the instrumental track. Very nice! “Alo” on the flip side sounds pretty esoteric and weird. It has a dark mood, keyboards, surf guitar and rather minimal electronic beats and some whispered, creepy vocals. I like this one as well. Get this single if you enjoy dark, electronic and experimental ambient/drone music with surf overtones!