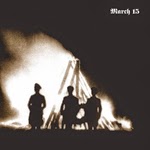 March 13 is an experimental avant-garde noise project by Sami Albert Hynninen (Reverend Bizarre, Orne, Opium Warlords etc.). I have to make clear right away that this is not my kind of music, so I’m definitely the right person to review the album but let’s give it a try. This is the tenth-anniversary release of the band’s first EP recorded in 2004 (but only released in 2008 on CD in Chile!) along with three new songs from 2010 and 2013. It’s all pure ghostly, screaming vocals, extremely distorted guitar etc. feedback and who knows what else kind of noise and filth. The two long EP tracks (“Our Love Becomes a Funeral Pyre”, “No Love Lost” ) also feature Vesa Karppinen from Fall of the Idols. The second one of these is more ambient and a bit more listenable to my ears, but the first one is just too much… On “Claustophilic Love of the Warm Dark Places Where the Masters of War Make Their Home” you can even hear what Sami is talking, and the track even has a riff, but an extremely distorted one. “The Love That Dare not Speak Its Name” has high-pitched sound and extremely distorted noise and later on some (in)human voice. Very experimental stuff… The long (9:37) “Love Under Will” starts off in a bit more tranquil manner but gets more noisy on its way. This is still rather bearable even for me, but not exactly a pleasant experience. The album is limited to just 315 copies on black vinyl and comes with a 4 page insert.