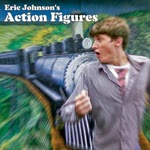 This is the first solo album by ex-Black Sun Ensemble member and SlowBurn Records founder, Tucson, Arizona-based multi-instrumentalist Eric Johnson. Other bands that he’s been involved include Sun Zoom Spark and Bread and Circus. On this self-produced CD that was released in late 2013 Eric is playing singing everything by himself, so hats off. This album sounds rather good, I must add.

The CD starts off with some hypnotic sequences at the beginning of “Soul Retrieval”, and soon the mid-tempo psych rocking begins. There are some rather mind-expanding elements here and this sure is one of the best tracks on the disc. “The Space Between” is a bit more “normal and mainstream” but still pretty good stuff. Then it’s time for a beautiful, peaceful and emotional ballad, and “Night Se Journey” also includes great acoustic guitar and airy keyboards. At times I’m somehow remotely reminded of “While My Guitar Gently Sweeps”… “Orange Made Word” is a nice instrumental with some post-punk/New Wave vibe, and “Inside Outside” a shorter rock ’n’ roll piece. “Closer” is a mid-tempo guitar rock number spiced with cool synthesizer stuff to give it a little Magazine touch. “Season of Circles” is another ballad and has a very melancholic mood. Great! “The Party Is Over” has some excellent fuzz solo guitar and is a pretty nice rock number in the vein of the Stones. “Barrett’s Blues” is the song that reminds me of Black Sun Ensemble the most. It’s the Eastern scale and slow, weird heaviness, I think. Also the instrumental “The Device” has pretty heavy fuzz guitar and great solos. After that blast it’s good to chill out with two softer songs (“Black Queen” and “Carry Me Around”). Also the last track “Demonstration” has a nice, even folky long acoustic intro, but it starts to rock in the classic late 60s/early 70s style in a while. I get some The Byrds vibes, but also The Rolling Stones etc. A great song too! Check out this CD and be sure to give it some time, you might like it very much.