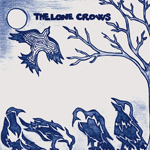 The Lone Crows is a new band from the USA releasing their debut album on German label World in Sound like for example Flying Eyes have done before them. I guess there is no interest in the USA to release 60s/70s styled heavy blues rock with some psych influences, but in Germany this style still seems to be popular enough. Well okay, The Lone Crows first released their debut in the US last year, but anyway. Personally, I don’t find this band that interesting but they still do a pretty good job at what they do. There are four young guys in the line-up, Julian, Andy, Tim and Joe. The album has a rather spontaneous, fresh feel and some of the stuff has been improvised in the studio and I do like that. Some of the songs are pretty standard heavy blues, some have a groovier edge and there’s even some Santana (“Heard You Call”) or Hendrix (“The Ghost”) vibes in there. The first song “Lone Crow” rocks out a bit in the stoner rock vein. Tim recorded the album as his final project in Minneapolis Community and Technical College Sound Arts Labs and did a pretty swell job. This is definitely nothing you haven’t heard before for many decades now, but on the other hand I feel it’s pretty cool that young guys want to play this kind of music in this time and age.
www.facebook.com/TheLoneCrows