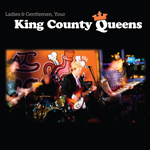 King Country Queens is a new band formed by four music veterans from Seattle. One of the Scott’s (there are three of those in the band) also plays with their label mates The Green Pajamas and used to play in Chemistry Set like another Scott, the thirds Scott plays in Half Light. Their rather radio-friendly music is a nice combination of psychedelia, power pop, showgaze & garage rock. They say their influences are The Church, Television, Buzzcocks, Charlatans UK, The Jam, The Standells, Black Sabbath and The Who. The first track “Words I Can See” immediately reminded me of the great psych pop of the late UK band The Magic Mushroom Band, so not bad at all! “Krautrock!” is not exactly kraut rock, but a very nice song anyway (just check the video below). “Kids on the Farm” evokes same kind of feelings than Neil Young, and so do some other tracks as well. “Kelp Whip” is melodic indie rock/pop. There are 12 tracks in total, and they’re all rather short. The longest track is the final, atmospheric and melancholic “A Tide of String” at 5:10. The psychedelic elements are quite subtle so you can listen to this album without blowing your mind. Good or bad, you decide. The guitar work sometimes sounds a bit like The Bevis Frond or Dinosaur Jr., which is definitely a good thing. Nice melodies and good songs, but nothing spectacular here I think. You can download the album for free unless you want to buy the CD, 100 first copies are autographed.
https://www.facebook.com/kingcountyqueens
Lähettänyt Unknown klo 13.53