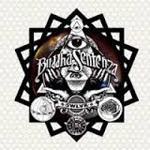 Well this is a surprising album. At first the band seems like an average, instrumental, progressive heavy stoner rock band that also uses some keyboards, but as the album progresses they get more psychedelic and interesting. Not that they were all bad at the beginning either… Buddha Sentenza from Germany have prior to this full-length CD/LP released one, limited edition CD in 2009. I have not heard this Mode0909 release, and it’s now sold-out. The band has been inspired by both Black Sabbath and Pink Floyd, and they have heavy rocking riffs as well as floating, outer-space elements in their music.
There are 14 tracks on the CD, but half of them are just short intros before every actual track entitled “Alpha”, “Beta” etc. The vinyl version only names the actual tracks. The heavier, psychedelic stoner rock styled tracks are the slowly building “Time Wave Zero”, “Arrested Development”, “Spanish Revenge (Hieronimo Is Mad Again)” that also has some more atmospheric parts and “Tzameti”. You will enjoy these pieces if you dig bands like Monkey 3, Colour Haze, Causa Sui, Karma to Burn etc. “The Monkey Stealing the Peaches” is also more up-beat and progressive, but not that heavy and even has some jazzy edge. Okay, maybe not that special but still quite nice. What really makes this album dear and special to me are the rest of the tracks, though. “Debris Moon” is a rather quiet, peaceful, spacy and ultra-hypnotic trip that takes you to other worlds for almost nine minutes. Excellent! My second favourite is the last number that is suitably called “Psychonaut”. Like “Depris Moon”, it’s quiet, peaceful and dreamy and also includes some violin, percussion and nice, spacey effects. I hope they will do more stuff like this in the future!
www.buddhasentenza.de