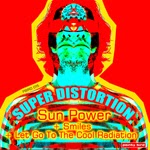 Super Distortion is mostly a solo project by Pete Bradley from the Isle of White in the UK. His influences include for example Tame Impala, Neil Young, The Beatles, Syd Barrett, Hawkwind, The Fall and The Brian Jonestown Massacre, and you can hear all that in his folk/prog/pop/rock. I have reviewed his stuff before, and this time he sent me a promo CD single of a three-track web download that’s available from his Bandcamp site for just one pound. That’s cheap! “Sun Power” is the “A-side” on this single, and this is the heaviest track with some very fuzzy distorted guitars and heavy organ. This mid-tempo rocker has a nice, Led Zeppelin-like groove and great vocals as well. I like the music and the message too! The two-minute “Smiles” is a sunny, whimsical, simple, mostly acoustic folk song, and the last track “Let Go to the Cool Radiation” a bit more rocking, groovy song that sounds a bit like The Verve of Lenny Kravitz or something. They might play this on your local radio channel, no doubt about that, since this is a pretty cool, catchy song with some pop melodies but dirty, fuzzy guitar sound. Very nice!
superdistortion.bandcamp.com/