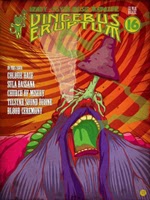 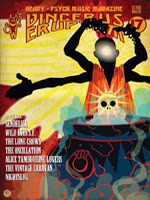 Since I received the issue 16 very late and issue 17 very early, I’m now reviewing both issues of this great Italian heavy-psych music magazine at once. Both are still available. This very colourful and psychedelic looking magazine is written in English and always includes bands that I really like. Issue 16 has interviews with Colour Haze, Sula Bassana, Church of Misery, Telstar Sound Drone and Blood Ceremony, so quite different stuff is included! Stefan Koglek from German progressive stoner psych band Colour Haze tells us about his future plans, recording techniques, the importance of vinyl editions and his record label. Very interesting! Dave Schmidt aka Sula Bassana is one of my biggest musical heroes so I can never get enough info on him. We get to know some of his roots and music taste as well as more detailed stuff about Electric Moon, his main band right now with his partner Lulu and how to sustain a long career in music. The Japanese heavy stoner doom monsters Church of Misery are always entertaining with their mass murderer enthusiasm, and it’s nice to hear a bit from the founder bass player Tatsu’s background as well. Telstar Sound Drone is an excellent, rather new psych band from Denmark who released their debut full-length for Bad Afro last year. This is only the second interview with them I have read so it was very interesting. You might know a couple of these guys from the Baby Woodrose live line-up… The Canadian occult psych/doom band Blood Ceremony makes excellent music and the interview with their female singer Alia O’Brien is also most enlightening. Over one half of the magazine is dedicated to album reviews (including Sendelica, Uncle Acid and the Deadbeats, Black Rainbows, Carlton Melton, Naam, Giobia etc.). A very enjoyable mag!

Issue 17 is just out and is, once again, just amazing. In this issue we get interviews with Sendelica, Wild Eyes S.F., The Lone Crows, The Oscillation, Alice Tambourine Lover, The Vintage Caravan and Nightslug. I had never even heard about the last two, so some new acquaintances this time! I’m very familiar with the Welch space/psych rock band Sendelica, though. So are Vincebus Ereptum, and they have also released some of their stuff on vinyl and I’m very grateful for that. Peter Bingham tells us about his previous bands, collaborations, relationship with Fruits de Mer Records and a lot more. I didn’t know all that! I’m not a big fan of Wild Eyes S.F. or The Lone Crows but both these interviews are still nice to read. The Oscillation from the UK, on the other hand, is one of my favourite bands right now and I was very lucky to see them live at the Liverpool Psych Fest last year. This psych-drone band will blow your mind! It was not a big surprise that their influences include Loop, Spacemen 3 and old krautrock, but there is a lot of interesting material in there. Italian band Alice Tambourine Lover (mistakenly written on the cover in plural form…) is a new band based on the ruins of an Italian heavy-psych band Alix, and their music is more blues-based. I still need to review their second album. I’ve got no idea how VE met with The Vintage Caravan, a retro rock band from Iceland! I think I’ll have to check them out. Not sure about Nightslug, who are described as “creepy, unsettling heaviness…based on profound Hardcore Punk background”. When the singer/guitarist is asked what caused them to be so bleak and oppressive, his answer was. “Nightslug is bleak and oppressive because life is, too. There are so many negative things surrounding us. Anger, violence, sorrow, death, despair and all the shit, it’s all real.” Doesn’t really sound like my kind of thing… The great album reviews include for example the new Void Generator album (I want a copy! Or did I get one already? I’m drowning in promos), The Movements, Spids Nøgenhat, The Grand Astoria, The Flying Eyes, Earthless, The Cosmic Dead, Vibravoid, Krautzone and Wolvespirit, and there is also a short mention about the Shindig! Magazine’s Interstellar Overdrive, their amazing issue dedicated to space rock. You can get these lovely mags with great cover art by Kabuto for only 3€ each. Most recommended!