Schnauser: As Long as He Stays Perfectly Still 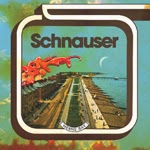 It’s a small miracle that there have been no Yes or Soft Machine covers on Fruits de Mer yet, but now it’s time to settle this at once. Schnauser is a psych/prog band from Bristol, UK, founded in 2005 by Alan Strawbridge formerly of The Lucky Bishops. They have four albums out, the two first being just digital releases at Bandcamp, but the last two are out on CD. Hey, I need copies! These guys really can play and sing and they are perfect to interpret both early Yes and Soft Machine. “Astral Traveller” was originally released on the 1970 Yes album Time and a Word and happens to be one of my favourite Yes tunes. It still has lots of the 60s psych feel to it, although being rather progressive but with those wonderful pop melodies. Schnauser stays quite true to the original still making the song their own. Excellent version! The Soft Machine track is “As Long as He Stays Perfectly Still” and things get jazzier until the very psychedelic freak-out part in the end. Wonderful stuff! I don’t think I need to say more just buy this 7” before it’s gone since this very promising and relatively new band certainly know what they are doing.